NO EXIT: Even though your band name starts with "Dis" you're not a standard d-beat band as one might expect, give me some info on how you got together and under what circumstances. Present yourselves in a very serious way as this is a very serious music publication.

DISCORDANCE: We aren’t a standard Dis beat band because we didn’t mean to be that kind of band. Sorry hahaha.  The band took its name from the noise-industrial intro of Napalm Death’s record "Utopia Banished" and means lack of harmony or agreement.We started as a project, jamming with guitar and drums.We had some ideas that later were transformed into tracks and more tracks and finally we had enough material to force us take the next step and evolve into a full band.So Giota and Vagellis that were close friends of us joined the band.All of us were hanging out in the same places like political autonomous spaces, squats and d.i.y.  venues but most important we had the same views on d.i.y. beliefs and same musical taste .So we were sure enough which way the band will follow and how to make things get done. 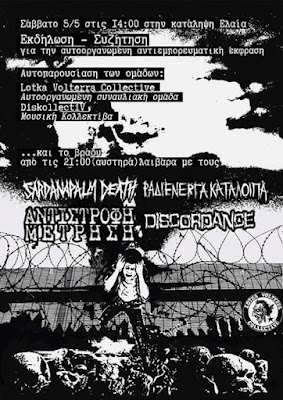 N.E: As far as I know, the band started in the city of Patras where you studied to become useful members of the society,what went wrong and decided to sell your soul to hardcore/punk?

D: Simple,society rejected us and the punk community was our lifeboat.A community of thinking people who don’t get in line and follow the rotten values of society,a community which stands against the state oppression and all the shit that a state represents.People just like us who struggle for something, have same stories and experiences.

N.E: Your take on crusty hardcore is not something new but it's done straight from the heart and keeps a politicalperspective, a combination that sadly not a lot of bands have nowadays. When I first heard the tracks that would beon the LP I was excited because it reminded me so much of the early '90's greek crust bands such as Chaotic End &Breath/Ash, did that sound came naturaly or was it something you aimed for from the beggining?

D: The sound of 90's Greek crust bands is something that we grew up with, so it was inevitable not to be a major part to our sound. Definitely, it came naturally, we didn’t have any purpose to sound specific like this band or that band but we are trying to create our unique style without forgetting our roots.

N.E: Did you have previous experience playing in bands? At the moment you also have some other projects going on, care to mention them here? Don't be shy, this might be your moment of glory and fame!

D: Yeah, most of us have played in several bands in the pastand all of us are having active bands/projects besides Discordance.Apostolis is also playing drums in Sardanapalm death and was member of Black ships &Foreign Land. He also plays techno music under the name of Sentna.George was playing in a band called Radioactive waste and also has started,some months ago,a raw noise d-beat band called PissSniffers.Giota is singing in a new band called Anifora.Vagellis was playing in Exrated and krushya and he is also a member of Bionic Origin and Warbound order. 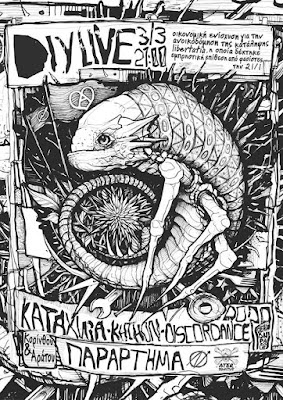 N.E: To my knowledge, you're the only "female-fronted" band with aggressive sound in the greek punk scene, Giota did you had second thoughts when you took over vocal duties like comparing yourself to male vocalists or not being sure if you're going to make it or that stupid thought "what people might think" that is ever-present in the greek society? If yes, how did you manage to overcome?

D: From the beginning I wanted to take over the vocals and I want to thank the rest of the band for their help & support!It was a chance for me to express myselfand do it collectively and self-organized, opposing the terms of music industry that degrades my need of expression into a product.I never put myself into any comparison although the punk scene is male-dominated or care what society will think about me. I don’t have to prove anything to anyone and I don't think it is a matter of competition. Instead, I find more important for women to claim more space into the scene.

N.E: Let's talk a bit about your releases, so far you have an LP and just some time ago you participated in a 6-way split tape with international bands. Inform the public how did these come about? I want to know more of the process behind like where it was recorded/mixed/mastered and how much effort did you put in contacting all the people involved. A DIY release is always a collective effort, correct?
D: All recordings, mixing &mastering was done in Flowers in concrete studio at Patra which is a self-organized musical studio,aiming to support diy bands and projects whichruns under the free contribution/donation support.Our album cover art was done by Mike of Putrefurnaced guerrilla graphics, Okso 81 made us a cool design for t-shirts that was printed by Inkspit rats.All of the above are members of the diy network and we share the same perspectives and ideals.So as a band, it was a conscious choice to support them instead of giving our money for “professional studios”,famous graphic designers or any kind of capitalistic company.In addition, we can’t forget the labels that helped and supported us.We wanted as many as possible self-organized collectives and individuals to get involved and support each other.We believe that the d.i.y. scene is a living organism that is growing,improving , evolving and it’s up to us to keep it this way.
As for the 6 way split tape, it was a proposal of Dario (member of Chikara band).We had two songs, so why not to participate to a cool split with other bands from all over the globe?

N.E: Where you draw your influences from? Both musically and lyrically. I have to point out that you managed the greeklanguage great and all the anger/despair/raw power is felt in every word!

D: Lyrically, we are inspired by social and political matters,human relationships and mental conditions, everyday alienation and technological disasters which are things and situations that affect us and we ‘ve experienced in our everyday lives.So, we had a lot of reasons to take a stand and shout  in your face and express our anger and denial for this sickening world.As for the musical part, we combine crust,hardcore punk,a little bit thrash and grind elements.As members, we are all listening to these genres so it was unavoidable not to pass our influences in our music. 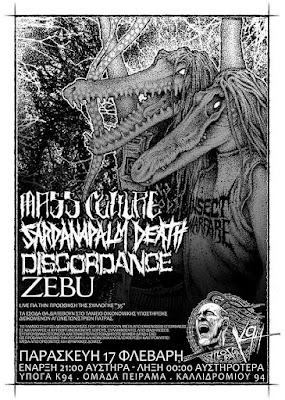 N.E: Do you have any plans for the future? Maybe some shows in Germoney and call it "euro tour"?!

D: Hahaha we are having proposals for some shows in Europe but the fact that we are not all living in the same city plus we are all working ,is preventing us to hit the road and make a tour. Sometimes, it is even difficult for us to participate in gigs here in Greece but we are trying our best to play as many gigs as possible and support specific causes.Also, we have some tracks ready for recording so keep an eye on us.

N.E: Ok I'm out of questions, here we go with a last one: let me know your absolute favourite record of all time!

D: We can’t say only one or two, each of us has a dozen of favorites.Just to name a few for the interview
Contropotere-Il SemedellaDevianza
Discharge-why
Death-sound of perseverance
Burial-speed at night 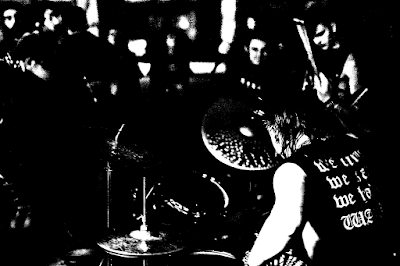 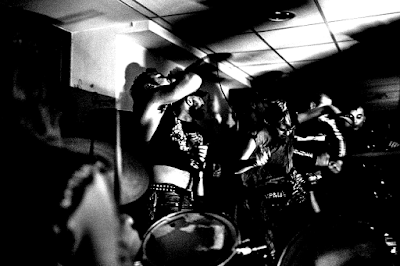 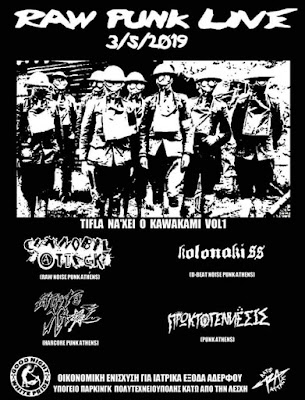 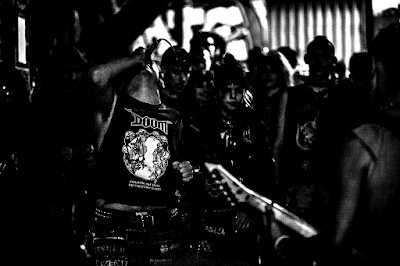 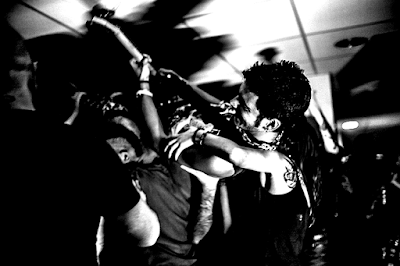 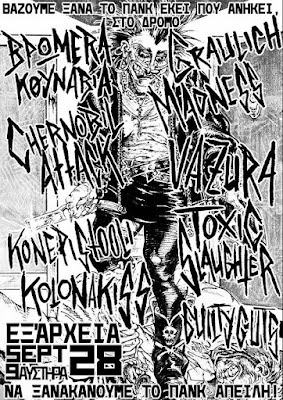 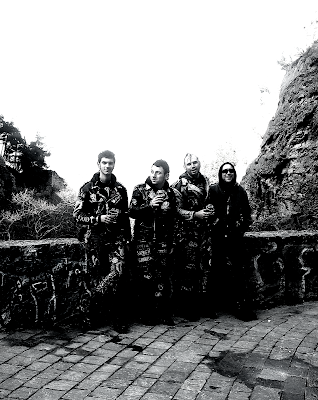 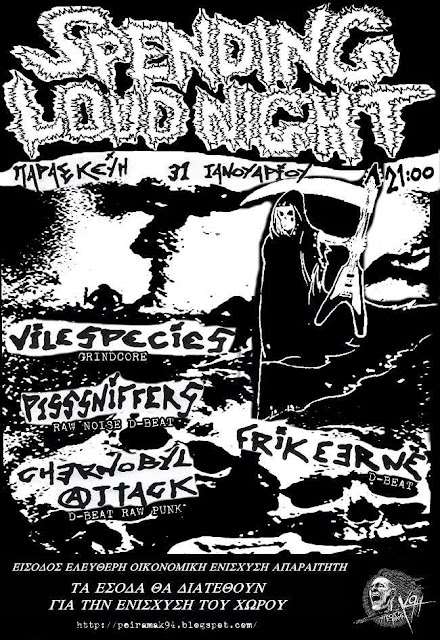 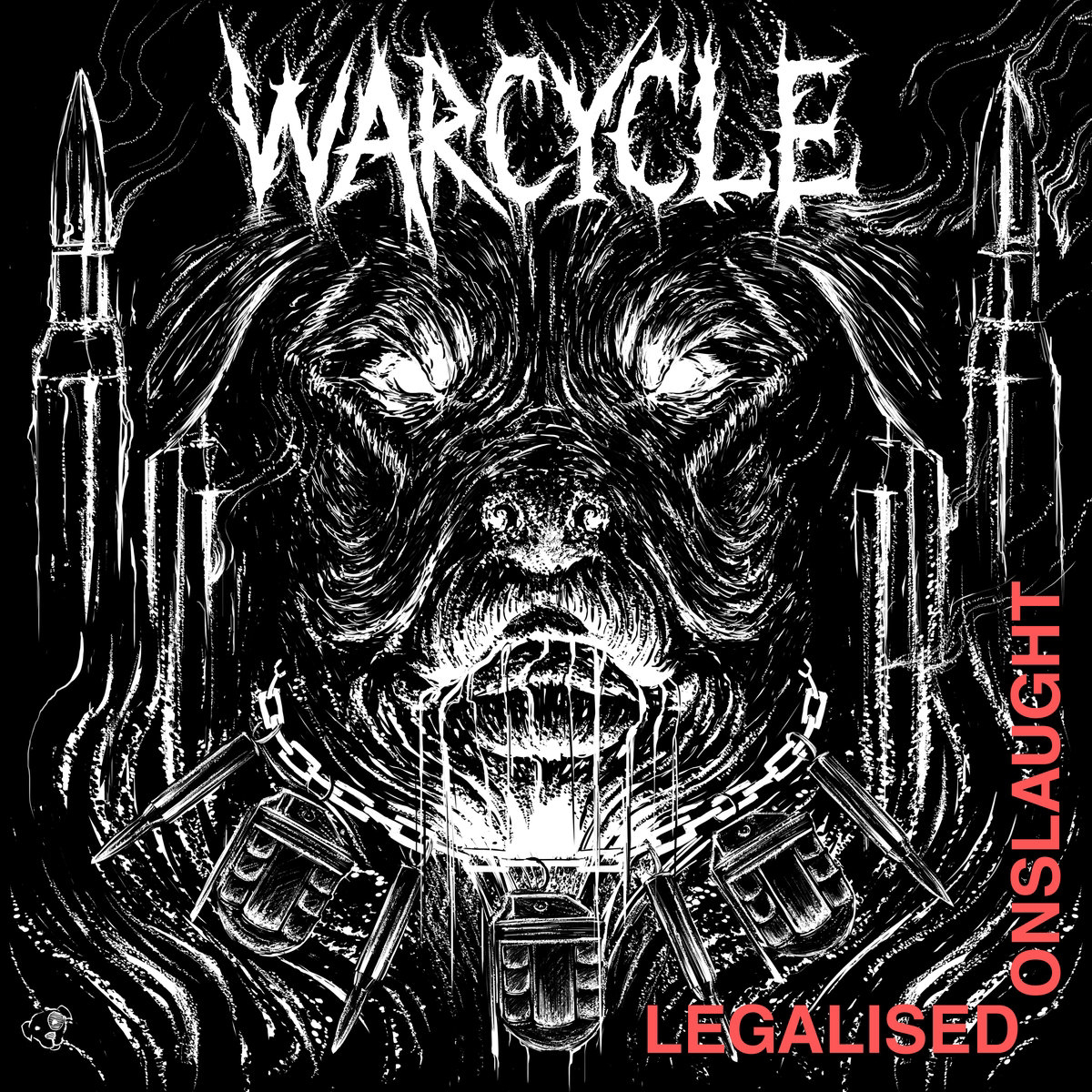 Posted by Scull Crasher at 8:21 PM 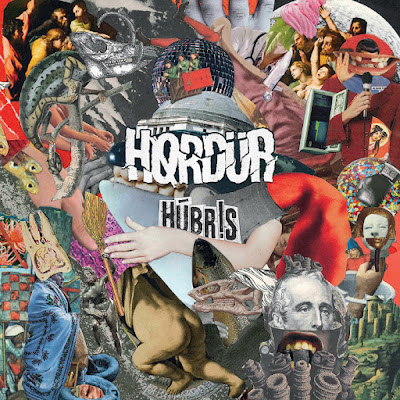